verb
1. to intentionally ignore a curious incident, or object: Being of a weak disposition, the man concretenecks any traffic pileup that he drives by.

noun
2. a person who deliberately avoids looking at something of curiosity, or interest: When it comes to his brattish kid’s antics, the man is a huge concreteneck.
3. A blasé person.

A brilliant piece on how to play Hangman better.

“A Better Hangman Strategy” from Lifehacker

According to Business Insider, on its final Pre-IPO private market transaction on SharesPost, the private capital online marketplace, shares of Facebook traded at a value of $44.10 per share. Using the 2.33 billion fully diluted outstanding share count cited in Facebook’s IPO prospectus, that equates to a value of just under $103 billion.

Given Facebook’s last year earnings of $1 billion, that gives the firm an implied P/E of approximately 103X, which is incredibly high, considering that for Apple and Google, the ratios are respectively, 17X and 22X. Moreover, in absolute terms, Facebook’s valuation is 1/2 that of Google, whereas its revenues are 1/10th that of Google’s (1/3rd of Google’s Free Cash Flow).

The Business Insider’s report could not be independently verified at the time of this piece; however, the latest contracts posts on SharesPost do show that Facebook’s valuation has been hovering around the $100 billion mark, even exceeding at times, in private transactions. 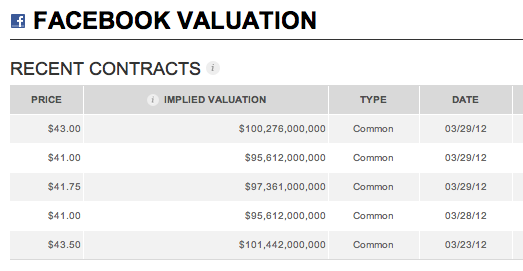 To justify such valuations, Facebook has to grow incredibly big, incredibly fast. Most investors and analysts are counting on Facebook finally monetizing, post-IPO, on its approx. 1 billion global users – something it has not done extensively nor successfully yet.

Meanwhile, according to PrivCo, the private company data accumulator, Facebook is rumored to begin its roadshow in the first week of April, 2012. However, with Facebook Q1 ending on March 31, 2012, it appears unlikely that the roadshow will begin so soon after the close of Q1, since Facebook would need to disclose Q1 results prior to launching the roadshow. Also, the Wall Street Journal reports that Facebook is targeting May, 2012 for its IPO., which seems quite realistic.

Whatever happens, the next few months are going to be eventful (Finance pun intended) and the next few years, tumultuous!