A good read of an article that discusses the possibility and impacts of a US debt default, brought about by Congress not increasing the US debt limit. The piece goes on to talk about (albeit briefly) about the global repercussions of such an event. Also, it touches on the likelihood of market movements forcing the govt’s hand. 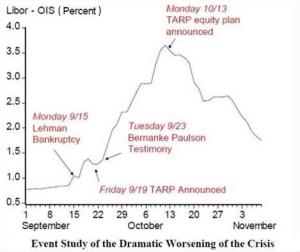 The graph (not from the article), interestingly, paints a thousand words as it depicts the Lehman bankruptcy and the resultant cost of debt rise followed by the forced TARP announcement, resulting in some relief. Expect to see such curves just around the corner!

I am inclined to believe that the market will force some resolution to the current impasse between the Republicans and Obama’s policies. Irrespective of the outcome, the markets will suffer – default would set off a string of indices, ratings and prices fall, while resolution-imposed austerity measures will also have negative consequences, although not as profound nor catastrophic.

“US Default would Likely Cause …” from The Huffington Post