Having led smartphone sales over the last five years, Nokia is set to lose its top spot as the largest seller of smartphone in Q3, 2011, according to Gartner.

These are in terms of smartphone sales to end users. In terms of shipments to vendors, Nokia has already lost the top spot to Apple (and the 2nd place Samsung), according to research firms Strategy Analytics and IDC Research.

In terms of Operating Systems, Google’s Android has a significant lead in market share of new smartphones, being installed on a number of different vendors’ devices (namely, Samsung, HTC & ZTE), with Apple’s iOS in second place. 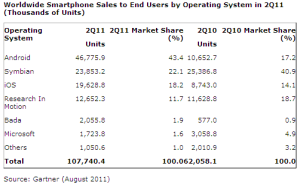 Both these systems have the functionalities that consumers seem to desire, woefully lacking from Nokia’s aging Symbian. Nokia’s accord with Windows Phone, which will start showing up on Nokia devices in Jan 2012, may revive some of its lost fortunes, but that remains to be seen and tested.

The rising popularity of smartphones, specially Android phones, are due to the availability of low-priced smartphones (below €99 in Europe) offered by manufacturers and through carrier promotions.

In terms of overall mobile phone sales, Nokia still maintains the lead, with Samsung rapidly catching up. Interestingly, Asian manufacturers LG and ZTE (apart from Apple) round up the rest of the top 5, having pushed Blackberry-maker Research On Motion (RIM) off the list. Also, a significant percentage of the mobile phones (approx. 25%+) sold in Q2, 2011 were from “White Box” vendors, small manufacturers mainly in Asia that don’t have well-known brands, according to Gartner.