According to Experian Hitwise, the social network has seen an accelerated lifecycle transition as innovators make way for early adopters and mainstream users, just six weeks into the launch of the network.

Initially, young singles and recent college graduates, or “Colleges and Cafés”, had taken to Google+, their usage peaking at three weeks. Now, as these innovators decrease their frequency of visits, “Status Seeking Singles”, the early adopters continue to make up a large part of the userbase, along with “Kids and Cabernet”, described as prosperous, middle-aged married couples living child-focused lives in affluent suburbs. According to Experian, this “Kids and Cabernet” group is the first sign of Google+ adoption by mainstream users.

In terms of raw demographics, FindPeopleOnPlus has a lot of data to work with and the findings are quite interesting.

The data on users from or in Bangladesh, reveal the following based on a identified sample of approx. 6,500 users as of date. Google+ users in Bangladesh are approx. 90% male and 10% female; in terms of occupation, 25% students and 7% are IT Professionals, the others are a mix of journalists, freelancers, service-holders, teachers, researchers, doctors, engineers, etc. A overwhelming 58% of the users are from Dhaka, Bangladesh, with NYC, New York, USA coming a distant second. The employer (apart from self-employed and students) that has the most Google+ users in Bangladesh is Samsung R&D, which is rather a distinction.

The following charts depict part of the statistics. 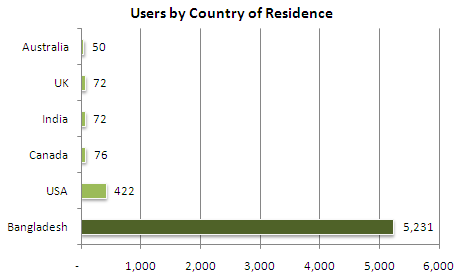 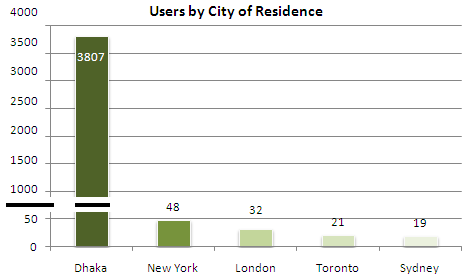